Teachers union strikes in Sacramento and Mt. Diablo made headlines over the last week as unions across the state take advantage of pandemic fatigue to strong-arm districts into paying their ransom: higher teacher pay.

If California parents didn’t learn it during the height of the pandemic, they can see it clearly now: teachers unions don’t care about kids. If they cared, they would be focused on what should be every school’s top priority: keeping kids in school after two years of trauma and making up for all that learning loss.

But teachers unions are utterly shameless.

Student test scores in reading and math are in the toilet, so what do teachers unions demand? More money!

Districts offer teacher raises they can afford without risking bankruptcy, so what do teachers unions demand? Unrealistic pay hikes, budgets be damned!

Student absenteeism is at an all-time high, so what do teachers unions demand? To be paid by student enrollment instead of daily attendance!

Californians are struggling with inflation and higher gas prices? Who cares that they’ll also have to pay higher local taxes to pay for teacher raises!

The not-so-secret charade the unions play is pretending teachers are woefully underpaid. But California’s public school teachers often make more in pay and benefits than the average salary for other private sector workers in their districts with college degrees — for nine months of work.

If unions really want to “recruit and retain” new teachers, the first thing they should do is get rid of that failed system that penalizes the best teachers and rewards the worst, regardless of performance.

Sacramento City Unified School District (SCUSD) teachers went on strike this week, despite being the highest paid school district in the region when it comes to total compensation.

SCUSD teachers are paid an average of $83,000. That’s higher than teachers in the largest nearby districts, San Juan, Stockton and Elk Grove.

When California Policy Center conducted an analysis comparing SCUSD teacher salaries to Elk Grove Unified, we found that SCUSD’s average regular teacher pay beat teacher salaries in next door Elk Grove by $2,000-$10,000. But, when you look at benefits, SCUSD teachers take in a very generous $35,000-$37,000 in benefits compared to an average of about $25,000 in benefits for Elk Grove.

Not bad for nine months of work!

So why is the Sacramento City Teachers Association complaining? In the spirit of “never let a good crisis go to waste,” they want a piece of the COVID relief funds the district received. District officials say that those funds were used to pay for nurses, social workers, counselors, and school psychologists to address the “urgent needs of students coming out of COVID isolation.”

Plus, as the district explains, those are one-time funds and can’t be used to negotiate ongoing expenditures like salaries. Salary negotiations are rightly part of a “successor agreement” the district is negotiating with the union on a separate track.

Sounds reasonable, especially since SCUSD is under fiscal oversight by the Sacramento County Office of Education because the district was almost taken over by the state in 2019 for fiscal ineptitude. That disaster can be laid at the feet of Sacramento Mayor Darrell Steinberg, who in 2017 helped negotiate a deal that raised teacher salaries by 15 percent.

When a state audit found the district could not afford the deal, auditors noted that one-time funds from the Legislature “likely gave the impression that the district was in better financial condition than it actually was.” The County Office of Education rejected SCUSD’s budget and gave the district until November 2019 to “find $16 million in cuts to avert receivership.”

Fast forward to today, where, due to school shutdowns during the pandemic, the school district has found itself in a somewhat better position after saving money on water, utilities, transportation and other costs.

But in a frightening moment of deja vu, the unions want a piece of those one-time relief funds, ignoring the fact that Sacramento City Unified’s most recent financial report shows the district is $1 billion in the hole in part because the district has more in net pension liabilities than they do  general revenues.

That’s because teachers unions don’t care about budgets, district solvency, and most of all, your kids. The unions are striking now to be as disruptive as possible for one reason only: more money.

In Mt. Diablo, the Devil’s in the Teachers Union Deal

After threatening to strike near the end of the school year, a Contra Costa County teachers union got something close to the raise it asked for last week.

The Mt. Diablo Education Association (MDEA) had demanded a 12.5 percent salary increase over a three-year period, which officials at Mt. Diablo Unified School District said the district could not afford and would require staff and budget cuts. Time will soon tell if the district can afford the 10.5 percent raise it okayed.

Part of MDEA’s argument was, predictably, that its members are paid less than those in neighboring school districts. However, the Contra Costa County Office of Education provided a wage schedule to local media outlets telling a much different tale. 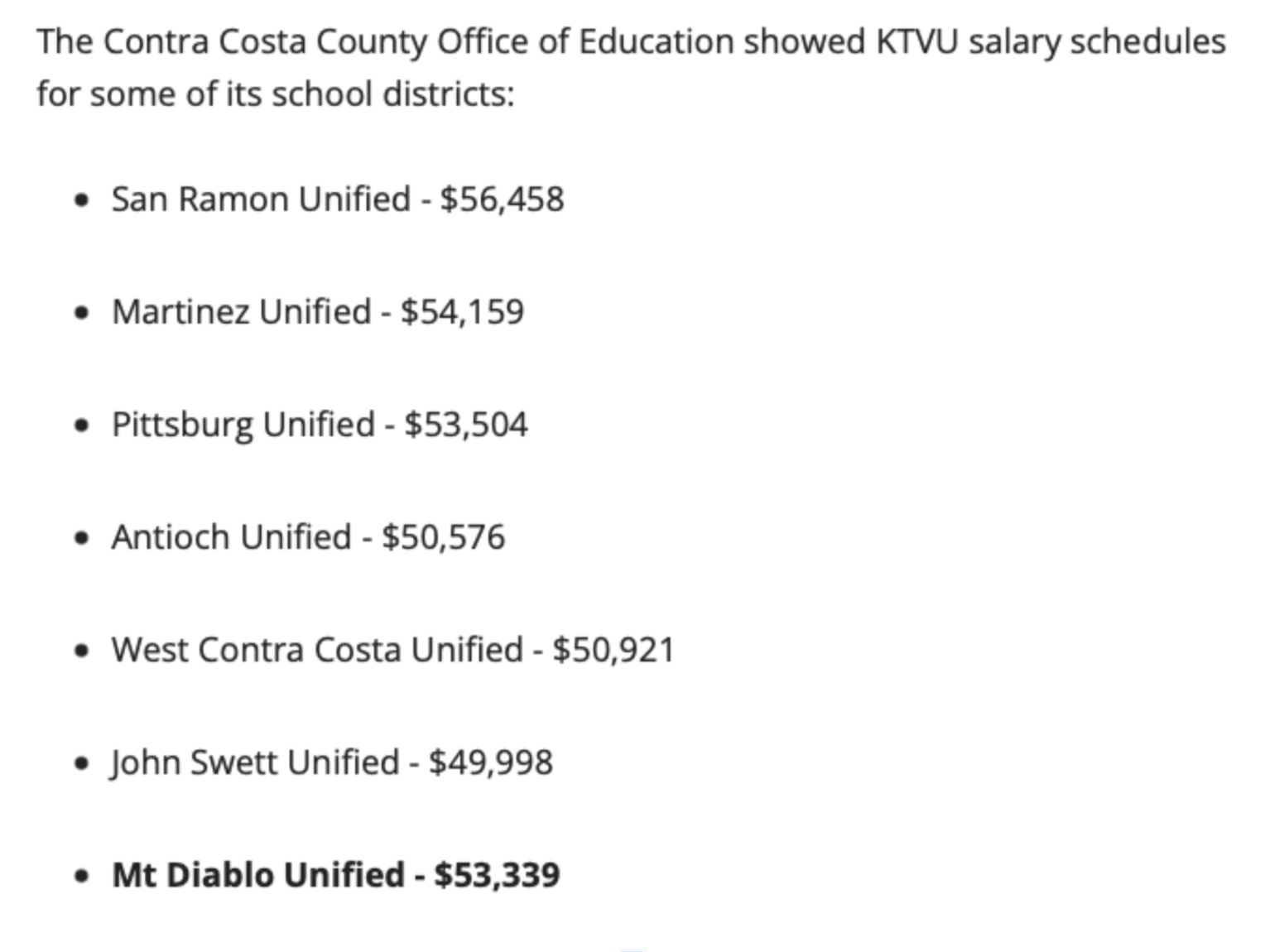 MDEA tried presenting the threatened strike as a fight for resources for students, but what resources are those, exactly? An MDEA fact sheet tries to connect the dots by stating these salary increases are required to make sure there’s a “qualified teacher” in every classroom.

That undoubtedly looks good on a picket sign, but it crumbles under scrutiny. If a raise is required to ensure there is a qualified teacher in every classroom, then that would mean without the raise there are currently unqualified teachers in at least some of the classrooms.

We could ask for clarification, but it doesn’t matter. It’s a hollow slogan used to terrorize parents and adminstrators and get MDEA what it wants — which has nothing to do with students and everything to do with teacher pay.

CPC Trains Teachers How to Opt-out of their Unions

This week, California Policy Center joined forces with Let Them Breathe and Let Them Learn to host a webinar training for teachers who want to opt-out of their union. Teachers who missed the event can always visit CPC’s website mypaymysay.com to learn how to leave your union now.

Dawn Collier is the communications director for the California Policy Center