The California Teachers Association has just dropped $10 million into its campaign to extend the “temporary” income tax hike voters approved when they passed Proposition 30 in 2012. Proposition 55, which will appear on this November’s ballot, would extend the highest income tax rates in all 50 states for another dozen years.

Four years ago, the muscular union, called by many in Sacramento the “Fourth Branch of Government,” spent over $11 million to convince voters to increase sales and income taxes. The campaign, paid for by government employee unions and led by Gov. Jerry Brown, repeatedly promised voters the higher taxes would last only a few years and then go away.

These ultra-high tax rates are scheduled to end in 2018 and union leaders are panicking. If the tax increase ends, there may be less money to fund increases in member pay and benefits.

Spending big money on politics is not unusual for the deep pocketed CTA which receives its funding from mandatory dues. Those dues, withheld from members’ paychecks whether they like it or not, can total more than $1000 a year for a single teacher. Recall that CTA laid out $58 million in opposing several worthy reform measures in a 2005 special election including one reform that would have capped state spending. Union leaders like a guaranteed cash flow so it should come as no surprise if they put out an additional $10 million, or more, to support the Proposition 55 income tax extension. For backers of Proposition 55, spending millions in return for billions of tax dollars is considered a bargain.

The campaign will, no doubt, target low information voters with messages about how, “it’s for the children.” It is standard operational procedure for tax promoters to use children as human shields when advancing a tax increase tied to education. Not to be mentioned is that the union’s interest is solely in increasing pay and benefits, including generous pensions, for members who are already paid more than $20,000 above the national average. And don’t forget that a national education union leader once famously said “when school children start paying union dues, that’s when I’ll start representing the interests of children.” 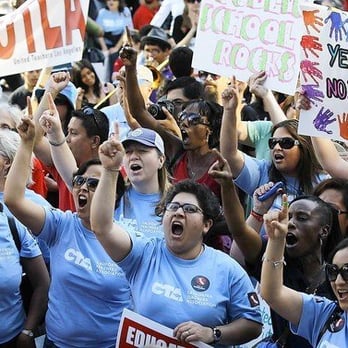 Some will argue that ultra-high taxes should be maintained because public employees deserve to be well paid. They are. According the Department of Labor, California is the state with the best paid state and local government employees.

Our state is running a multi-billion-dollar surplus, yet Proposition 55 backers want to continue the ultra-high taxes that are already pushing businesses, and the jobs they provide, to relocate out of state. And it’s not just businesses. The list of high wealth individuals including professional athletes and entertainers who have bailed out of California is a mile long.

But the deleterious impact of high taxes is wholly lost on the union bosses. Their attention is, no doubt, on the latest news from the California State Teachers’ Retirement System. The second-largest U.S. public pension fund earned a paltry 1.4 percent return on investments in the fiscal year just ended, missing its target of 7.5 percent for the second straight year.  This raises questions about the fund’s management and whether or not it will be able to meet its obligation to 896,000 current and retired teachers.

Of course, taxpayers remain the guarantor of all public employee pensions so, in all fairness, the Proposition 55 income tax extension could come to be called the “pension tax.” And the teachers union is prepared to use its massive “money club” on voters to make sure Proposition 55 passes and the taxpayers’ dollars are there.

Jon Coupal is president of the Howard Jarvis Taxpayers Association — California’s largest grass-roots taxpayer organization dedicated to the protection of Proposition 13 and the advancement of taxpayers’ rights.