Editor’s Note:  This post by regular UnionWatch contributor Mike Shedlock documents the latest bad news for the Illinois Teachers Retirement System. And of course, union-controlled Illinois politicians have a solution: More taxes in one of the most overtaxed states in America. Like many if not most pension reformers, Shedlock advocates a scrapping of defined benefit plans, presumably in favor of defined contribution plans. But it doesn’t have to be that way. An adjustable defined benefit plan could work, eliminating the mortality risk and much of the market risk that make 401K plans undesirable for many individuals. To convert defined benefits to adjustable defined benefits, you would have to (1) use lower rate of return assumptions, (2) lower benefits across the board – to retirees, existing workers, and new employees – on a pro-rata basis, to levels that would restore solvency to the funds. Floors for workers in low-paying jobs with modest pensions could be established, along with ceilings for beneficiaries whose pensions are, say, more than twice the maximum social security benefit. If unions representing public sector workers would accept these tough reforms, they could keep their defined benefits.

Via email, the Illinois Policy Institute explains the growing liability.

First, TRS only has $0.40 in the bank for every dollar it should have today to make necessary pension payouts in the future. That means the high investment returns in 2013 were earned on less than half of the assets that TRS should have

TRS acknowledged this in a recent press release:

“Despite these strong returns, TRS cannot invest its way out of the funding hole we are in,” Ingram added. “This increase in the System’s unfunded liability, even with good investment results, is another wake-up call to state officials and our members that TRS long-term finances continue to head in the wrong direction.”

Second, the inherent flaws of the state’s defined benefit pension system have driven up the shortfall significantly. According to the Commission on Government Forecasting and Accountability, the state’s pension shortfall grew by $41 billion from 1996 to 2012.

Of that amount, nearly $23 billion came from some form of missed “assumption” that continually plagues defined benefit pension plans:

TRS fails to acknowledge the failures of the defined benefits plan and instead chooses to blame taxpayers for not contributing enough to the system.

Who is to Blame for Shortfalls?

A common refrain sounded by public sector unions is that government workers have consistently “paid their share” into Illinois’ pension systems and the state has not. However, the facts tell a different story. 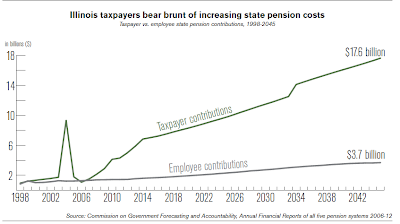 Illinois has five state pension systems, and all of them are seriously underfunded:

TRS, SERS,SURS, JRS, and GARS are all insolvent. None of them can possibly meet their pension obligations. With 10-year treasuries yielding a scant 2.5%, plan assumptions of 8% are preposterously high on a sustained basis.

GARS, the General Assembly Retirement System is only 17.4% funded. Is it any wonder that state legislators are pressing for more tax hikes?

Pension shortfalls are the reason for the proposed hikes.

A few people commented the “progressive” tax was not as much as they pay. Here is Rep Naomi Jakobsson’s proposed scheme.

What I failed to point out previously is that I pay $14,000 annually in property taxes on a home I can sell for $400K or so.

In spite of all these massive taxes, the entire state is bankrupt!

Raising taxes for the benefit of legislators and seriously undeserving public unions is certainly not the answer. The solution is twofold:

Nothing else can possibly work, and the numbers prove it.

About the Author:  Mike Shedlock is the editor of the top-rated global economics blog Mish’s Global Economic Trend Analysis, offering insightful commentary every day of the week. He is also a contributing “professor” on Minyanville, a community site focused on economic and financial education. Every Thursday he does a podcast on HoweStreet and on an ad hoc basis he contributes to many other websites, including UnionWatch.