Will California’s Election Day victories survive the ballot harvest? Californians seem to have rejected Proposition 15, a massive property tax increase on Golden State employers that would make many low-margin small businesses unprofitable, reduce job opportunities when they’re needed most, and raise consumer prices when so many are struggling to get by. The tax would force some businesses to relocate out of state.

Despite overwhelmingly uncritical media support of Prop 15, Californians have rejected it by 52 to 48 percent margin… so far. After all the mail-in votes and harvested ballots come in, Prop 15 may still pass. Californians have seen this movie before. The ending is not a good one. In 2018, numerous House seats in and around Orange County flipped from red to blue after Election Day when all the ballots were counted. This great tax victory may still turn into a defeat.

Prop 15 could follow the current nationwide precedent: President Trump and numerous Republican House and Senate candidates have seen their election night leads evaporate due to late counted mail-in ballots. On Thursday afternoon, President Trump claimed the election results have been infected with widespread fraud. Standby for the evidence, which so far has been anecdotal and unverified (though fishy nonetheless). Unfortunately, Philadelphia and Detroit don’t have the best reputations when it comes to election integrity. Of course, this fight is not an issue in California, which pulled the lever for Biden by a margin of two-to-one.

How to explain this phenomenon ? One possibility is that the Republican brand is damaged – not (as it would be convenient to suggest) because of the relatively recent arrival of Donald Trump. For decades, the GOP opposed not just many but all of the more libertarian (not say libertine) impulses of Californians. We’re a freedom-loving people, we Californians, and the Republican party’s opposition to gay marriage or legal weed, for instance, looked increasingly bizarre to younger Californians.

But the most powerful reason for the disaffection of Californians for the Republican Party is the relentless clanging and horn-honking of the leftist union machine. Government unions earn nearly $1 billion each year in dues they collect from government workers. They pour that cash into campaigns to elect candidates who, once in office, rubber-stamp the demands of union leaders for higher wages, richer benefits, and greater control over our government.

Government union-backed pickups in the State Senate demonstrate the dichotomy of California’s electorate. In contrast to their votes on the ballot measures, Californians supported State Senate candidates who will further cement government union dominance in the state legislature. While the political makeup of General Assembly looks like it will remain unchanged, government unions may succeed in flipping four seats in the Senate, expanding Democrats’ current 29 to 11 seat majority. These seats include:

Each of these Republican candidates faced an onslaught of funding from government unions looking to flip their seats. These new union-backed state senators will likely support the exact types of taxes and regulations that voters opposed on ballot measures. Talk about a schizophrenic electorate.

As it is, from the results so far, the one-party state may actually pad its dominance in the state legislature. Half of the state senators face reelection this year, and of the 20 seats, GOP candidates are only leading in two races, with both of those too close to call. One of the brightest GOP Senators, John Moorlach, may be headed for defeat. His story exemplifies what Republicans are up against.

Moorlach, the only certified public accountant in California’s state legislature, made the mistake of explaining to that handful of financially literate Democratic senators (a few do exist) how to reform public sector pensions before they bankrupt the state. For that, and despite his strong record of support for law enforcement, Moorlach earned the enmity of the prison guards union, which poured money into the campaign of his Democratic opponent. Moorlach stepped on the wrong toes, and in California politics, that’s a sure path to oblivion.

GOP should pick up U.S. House seats in California: Four California congressional races won by Democrats in 2018 are very close as national Republicans look to add to their small Congressional delegation in the Golden State. (If 2018 and the current national trend is any indication, after all the ballots are harvested, Republicans will be in tough to hang on to any of these):

Will Swaim and David Bahnsen break down these California election results on the latest episode of National Review’s Radio Free California: Listen HERE. As they point out, the data emerging from Tuesday’s California voting offer a fascinating possibility: Californians are conservatives who think they’re Democrats.

How much do California’s state workers make? In his latest analysis, CPC contributor Edward Ring uses just released 2019 data to reveal that average full-time California state workers are paid $97,000 annually, not including generous pension and healthcare benefits. No wonder higher taxes are perennially needed in the state. Writes Ed:

The reasons that California’s politicians have an insatiable need to raise taxes are many and complex. But principal among them is the fact that California’s state and local government employees enjoy rates of pay and benefits significantly greater than that of the citizens they serve.

This report is Part 3 in a series. In earlier reports, he compiled the average 2019 public-sector compensation for select cities and counties.

Knocking down the teachers union “defunding” excuse: In his latest analysis, CPC contributor Larry Sand highlights the latest terrible test scores for American students. He refutes teachers unions’ excuse that these F grades are a result of school defunding. As the chart below indicates, per-pupil, inflation-adjusted spending has increased by about 40 percent over the past two decades. 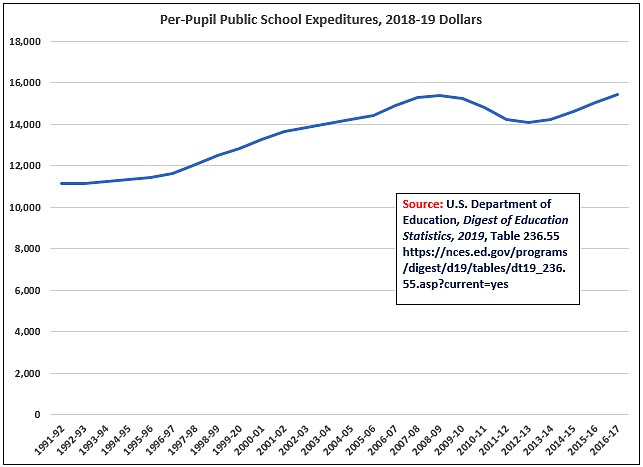 Tubbs sinks: Stockton Mayor Michael Tubbs has been the subject of dozens of fawning media profiles in outlets ranging from Bloomberg to The Guardian to The New Yorker for implementing a universal basic income experiment in his city. He’s enjoyed the backing of Oprah Winfrey and the Silicon Valley elite, who seem to think universal basic income is the cutting edge of public policy reform and the answer to our social and economic ills.

Yet it seems that Tubbs and his basic income project aren’t so popular in Stockton itself. Tubbs is on the way to being turfed out, trailing his Republican challenger, Kevin Lincoln, 52 to 48 percent. Hopefully, this result will ground broader plans for the universal basic income, universally celebrated by the mainstream media, from taking off statewide.

Paying able-bodied people not to work is as bad for the economy, the individual, and society as the punitive taxes on those who do.